transmission+interference (t+i) is the ongoing, collaborative project between David strang and Vincent Van Uffelen. The project has taken on many shapes since 2009 consisting of installation, workshop and (now) performance.

‘This develops in them a sensitivity or alertness to the diverse, world-forming properties of the art-tech imaginary: material, social and political. By sharing their processes and tools with artists, and audiences alike they hack and reclaim the contexts in which culture is created.’ [2]

t+i aims to be open for and to influence. We try to not only do it ourselves (D.I.Y) but aim to engage others by explaining our ideas and the used technologies and always asking for feedback. Thus to do it together (DIT) or to keep on doing it with others (DIWO)

t+i approaches ideas around noise, waves, light, memory, interference (physical and signal), electromagnetics (EM), radio, steganography and territory through the uses of hacked and appropriated tools. The core tool (which is to be made at the t+i workshop) is a sound transmitter and receiver that uses light as the transmitter or broadcaster of sound and a solar cell as the receiver. Using the light as carrier of sound we can broadcast across small, dark spaces letting the project touch on the edges of Radioart; in particular the work of Tetsuo Kogawa and Mini FM developed in the late 1980s in Japan. Mini FM explored aspects of narrowcasting, was influenced by Felix Guattari’s concept of ‘micro politics’ and ‘molecular revolution’, and allowed small communities to create and communicate. [3] t+i can be seen to reduce this narrowcast approach to the micro level using low powered devices where communicating across a building stretches the limits of the device.

‘We are surrounded by noise. And this noise is inextinguishable. It is outside – it is the world itself – and it is inside, produced by our living body’ [4]

Within the transmission and the system of tools / devices is a complexity of noise and signal. Noise is not unwanted – it becomes signal and acts as carrier of signal throughout the system – thus without noise is no signal. More than a parasitic artefact that is inherent in all the tools of t+i it is encouraged to flow between system parts to increase signal and even develop new potential in the signal. White noise is traditionally used in the exploration of EVP (electronic voice phenomena) to uncover sounds in the aether; ghost voices from the past invoking memory through radio and EM. Spaces filled with noise are picked up on radio sets to listen for disturbances in the aether with the noise providing a body for the EM signals to shape. ‘EVP methodologies and custom hint at an aether practice which offers a more definitive other side to the radio days; an aetheric noise which is neither transmission nor reception.’ [5] This approach to uncovering hidden sounds / potential is relevant within more modern approaches with technology under the term of Stochastic Resonance where noise is purposefully added to signals to increase the signal strength whilst also allowing for other, imperceptible sounds to be heard.

‘[…] we can scarcely imagine a time when there did not exist a necessity, or at least a desire, of transmitting information from one individual to another, in such a manner as to elude general comprehension […]’ [6]

Working with tools overflowing with EM it is then possible to uncover signal (unknown or known) by probing and modulating the signal into an audible spectrum. In reverse this also enables the hiding of signal or message within the system – the LED looks like a light but carries another message. The practice of steganography originates from the early methods of secret message passing across borders primarily with the use of slaves as the message carrier. A message can be passed and only unpacked / understood by its intended recipient as, to all others, there is no message apparent. The increasing levels of paranoia alongside increasing telecommunications investigated by NASA resulted in the publication of TEMPEST: A Signal Problem in 1972. ‘Any time a machine is used to process classified information electrically, the various switches, contacts, relays and other components in that machine may emit radio frequency or acoustic energy. … This problem of compromising radiation we have given the covername TEMPEST.’ [7] Within t+i we pack and unpack signals throughout the system; many are open to all but some remain closed.  Part of the creation of image within the project is applied via steganographic methods including the transmission of image within sound within light. Issues of territory or deterritorialization [8] are raised as the transmission is hidden not only within audible noise but beyond the perception of the unknowing eye or ear.

The system / devices also explores aspects of memory covering the human, the computer, and the (physical) devices. The use of microprocessors apply small amounts of memory capable within the system itself to adapt and respond to occuring events according to programmed states. This learning and remembering of the system builds up slight resonances between the parts that can build to point of collapse and then re-build from memory. The objects between the microprocessors carry their own memories according to their past existence – the turntable recalls playing records, the laser pointer recalls detailing information, kinetically moving part retain past momentum. Movement created within the system is used to create visual shape / order where rapidity creates memory upon the retina of the viewer – POV (persistence of vision). A single light point (or laser pixel) streaming across the retina is recalled as a line or circle.

‘It is clear that what is necessary to make sound travel, and to travel around sound, is very pure and simple sound, an emission or wave without harmonics (La Monte Young has been successful at this).’ [9] 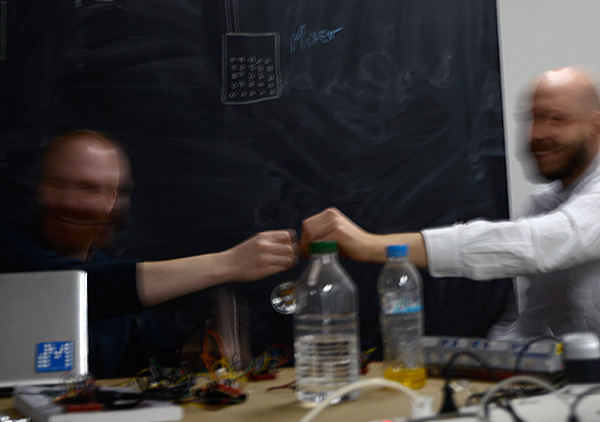 Transmission+Interference is an ongoing collaboration between David Strang and Vincent Van Uffelen researching light as medium of sound transmission and creation.