Disc Spinner is a device controlled by arduino that uses DC motors to spin discs above blinking LEDs. Arduino is used to control the speed of the LEDs blinking and the speed of the motors using analog inputs from potentiometers.

Velcro tabs are attached to the motor spindles to allow the user to firmly place a disc onto the motor and turn it at varying speed. You can use any kind of disc / card / material to attach. When using card cut out some sections to create gaps for the light to pass through. Placing a solar cell above the LED will then capture the light rhythms created by the LED blink speed in combination with the motor speed / card.

To build the disc spinner you will need: 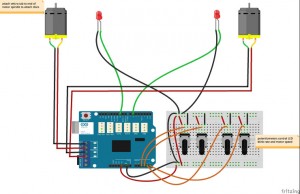 Here is a short video demonstrating the use of the disc spinner: